By diving or snorkeling is possible to encounter octopuses, moray eels and lobsters in a crystal-clear sea of a thousand shades of blue. And yet again: nudibranches, red gor-gonias, multi-coloured damsels and yellow parazoantus are a marvellous coloured setting for rock walls, grottoes and pinnacles. 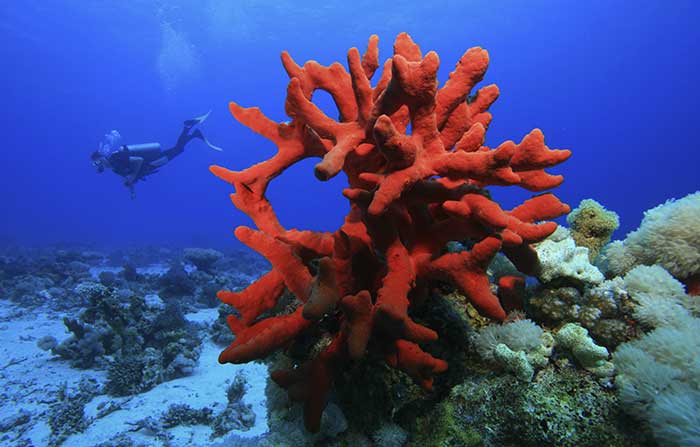 The promontory of Mount Cofano overlooks the view of the surrounding mountains: it is characterised by a watch towers system dating back to the Saracen age (built for coastal defense), from where a great view can be admired. It is the ideal place for trekking, horseback riding or mountain biking: a path, inside the Mount Cofano Reserve, runs along the coast. The most audacious and with good athletic qualities can climb up to the summit and admire a breathtaking 360 degree view. The rocky walls are steep, particularly on the north-western flank, beyond Punta del Saraceno in a south-westerly direction, where they drop sheer to the sea, creating small and delightful coves. 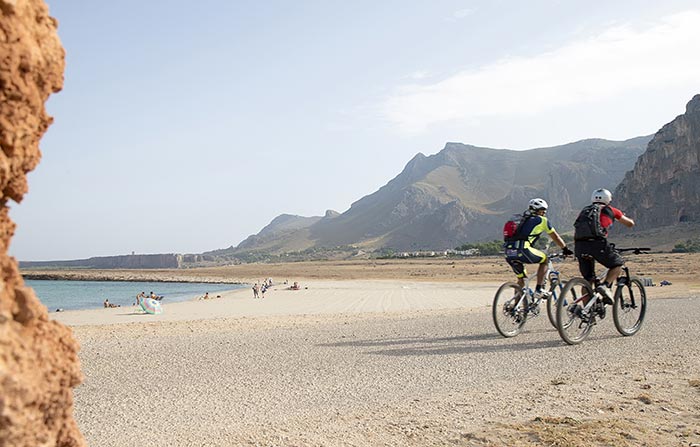 Visitors can also be guided in speleological excursions: there are many caves along the coast of Custonaci, interesting in geological and paleontological terms. Of particular relevance those ones located in Scurati. These caves present valuable traces of human settlements dating back to the prehistoric period (Upper Palaeolithic), such as fossils, weapons, tools made of flint and graffiti. And there’s more: here are the most beautiful rocky walls of Sicily, suitable for climbing enthusiasts. Mountains with unmistakable profiles edged with ridges and pinnacles. Steep cliffs rise up from the countryside stretching over tens of kilometers along the beautiful and jagged coast, as at El Bahira. Rocky slopes to be climbed which present themselves as isolated mountains or mountain massifs, but in any case unique and spectacular. 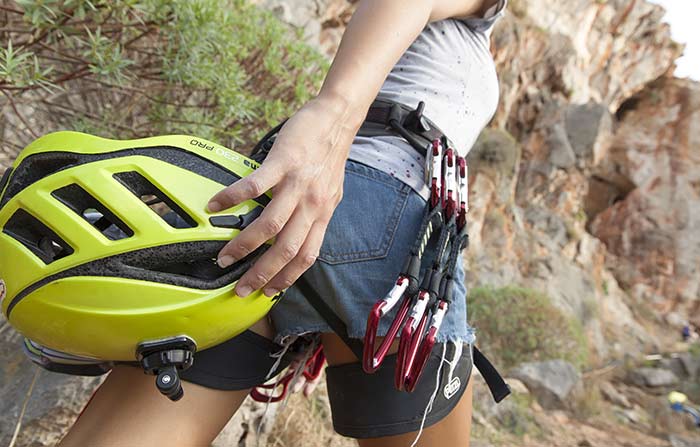 The coast is worth visiting also by sea. Beautiful boat trips depart from San Vito Lo Capo, with its beach of white sand, known as the "White pearl of Sicily”. Just beyond Punta Levante there is one of the Saracen watch towers situated along the coast: Torre Scieri (Scieri Tower). Further on is the Tonnara del Secco (Tuna factory of Secco) and continuing along the coast one of the most evocative place in the area can be admired: the Lago di Venere (Lake of Venus). 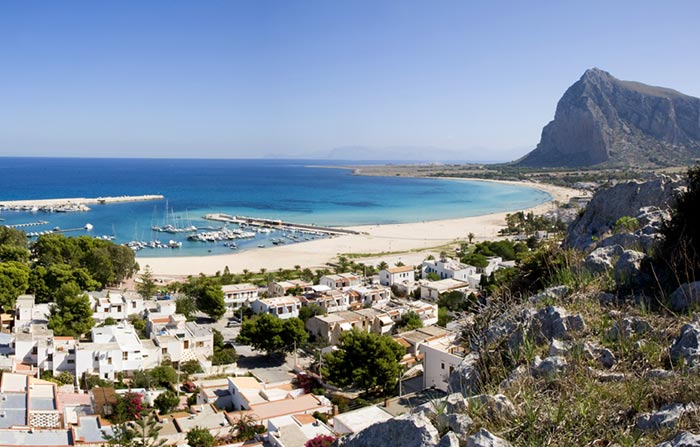 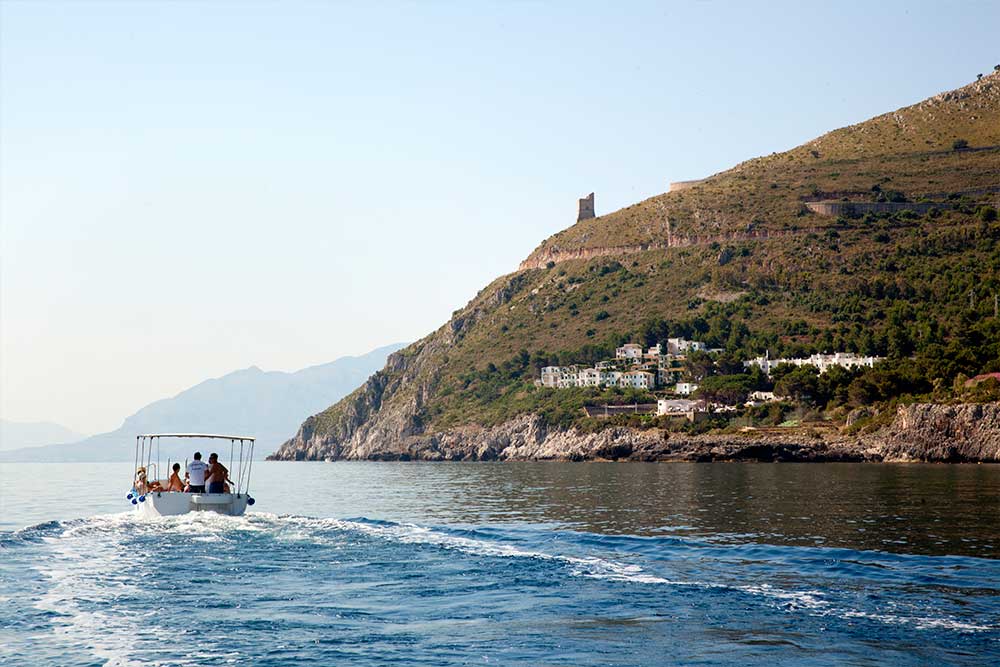 The Faraglioni (Stacks) of Scopello and its Tower, rise vertically from the sea as if to defend the Tuna factory and the hamlet above. Here the “Submerged Museum”, placed below sea level, can be visited: a submerged archaeological itnerary with finds dating back to the second century b.C. 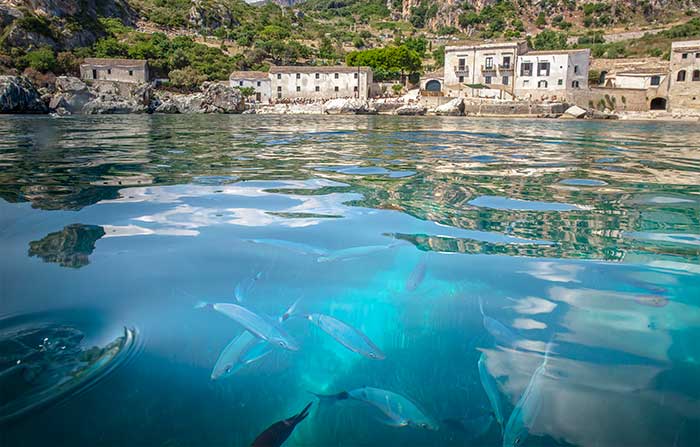 And yet again: the Aegadian Islands, to the discovery of Marettimo, Favignana and Levanzo. These islands make up an archipelago still wild, known for its small coves with crystal-clear waters (for example Cala Rossa and Cala Azzurra), for its numerous grottoes and for its shipwrecks on the sea bed. The Aegadian Islands are located off the coast of Trapani and Marsala, on the western tip of Sicily, and are easy to be reached by ferries. 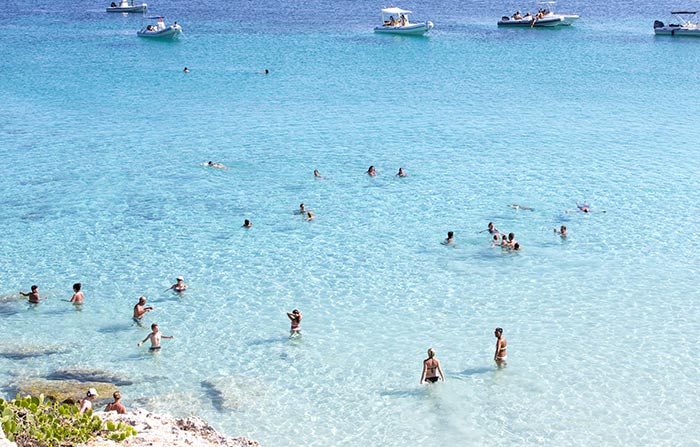 For lovers of historical sites and cultural heritage Segesta is a must. It was founded by the Elymians, descendants of some Trojans escaped from the city around the 4th century b.C. Close ally of Carthago, Segesta put the rival Selinunte to fire and sword in 409 b.C. One century later the Greek tyrant Agatocle destroyed Selinunte and the city was repopulated with Greek settlers. The temple and the theatre date back to this period. The Doric temple is preserved in very good condition and its columns powerfully rise up in the midst of the wilderness area of mount Barbaro.
A short distance away is the theatre, dating back to the Roman domination (3rd century b.C.), which has a semi-circular shape and could contain up to 4000 spectators. The theater is still being used for spellbinding representations. 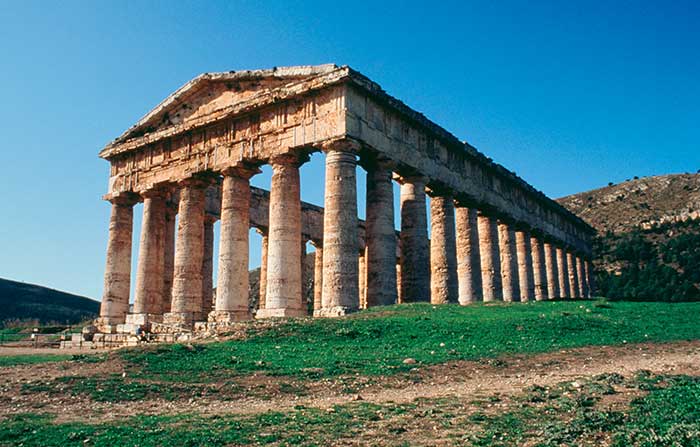 A few kilometers from Segesta is Erice, a city with great tourist and cultural interest. The hamlet is situated on the top of mount Eryx, at 750meters above sea level; it is a wonderful place both in terms of view and landscape offering unforgettable views of the coast. The historic center of Erice, characterised by a maze of lanes, alleys and staircases, has preserved its medieval charm.
The highest part of the city houses the remains of the “Castello di Venere (castle of Venus)”, built in the 12th century by the Normans on the site of an old temple dedicated to the homonymous goddes. The Elymians, descendants of the Trojans, founded the city around the 5th century b.C. For its strategic position it was contended by the Greeks and the Carthaginians up to 244 b.C. when it was taken over by the Romans. In the Middle Ages Erice was dominated by the Arabs and the Normans.
It is worth visiting two splendid churches: the “Madrice (Main Church)”, in the Gothic style and adorned with a superb rose window, and the church of “San Giovanni Battista (St. John the Baptist)”, dating back to the Gothic-Norman period, which has preserved its original portal. Erice is also known for the production of finely-crafted ceramics, bags, original carpets and delicious almond pastries.
It is directly linked to Trapani by cableway from which a breathtaking view, including the Aegadian Islands, can be admired. 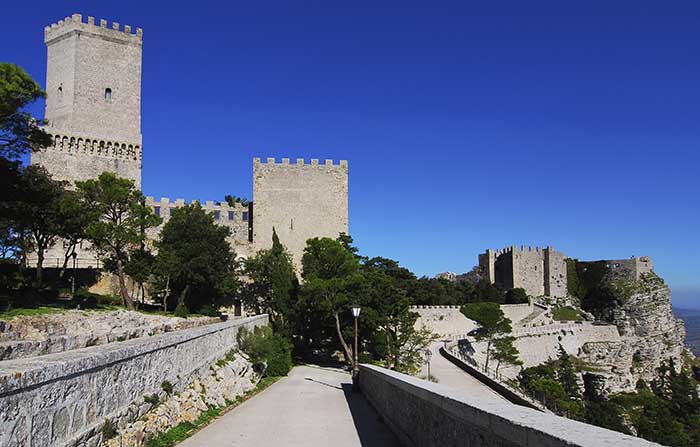 Located just in front of the Aegadian Islands, Marsala is known all over the world for its liqueur wine. The city, from where Giuseppe Garibaldi and his troops called “Mille (thousand)” started the endeavour to unite Italy, has undergone various dominations: the Greeks, Spaniards, Arabs, Normans, Swabians, Angevins and Aragons.
Its architecture reflects these different civilizations mixing baroque elements with Arabian style and Spanish decorations. It was founded by the Phoenicians who called it Lilibeo, namely “facing Lybia”; its current name was given by the Arabs.
An evocative promenade characterised by hundreds of aligned palms, the salt pans with their typical windmills and the famous Stagnone, a lagoon hosting the island of Mothya,  are the jewels that embellish the city. 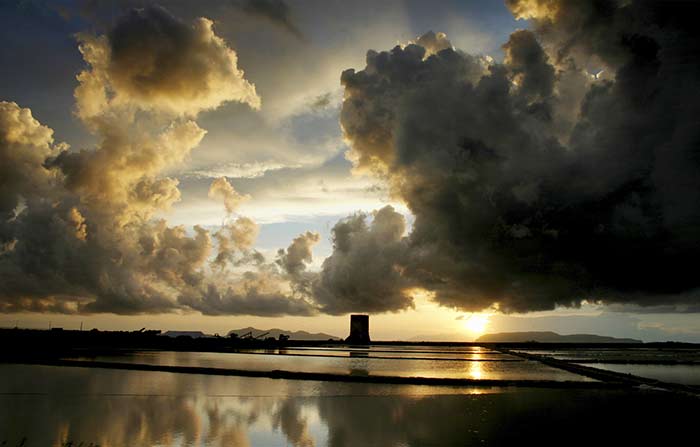 Selinunte stands out for its enchanting beach and for an archaeological park which every year attracts visitors from all over the world. It was founded around 650 b.C. by the Greeks coming from Megara Hyblaea and was a bitter enemy of Segesta. Geografically vulnerable, Selinunte was invaded and sacked by the Carthaginians in 409 b.C. who razed it to the ground leaving only ruins.
The archaeological park is one of the most important in Europe and preserves various temples, sacred places and altars. The site includes three main areas: the acropolis, the eastern hill hosting the temple of Hera and the sacred place of Malaphoros. Many sculptures found during the excavations are at the Archaeological Museum of Palermo. 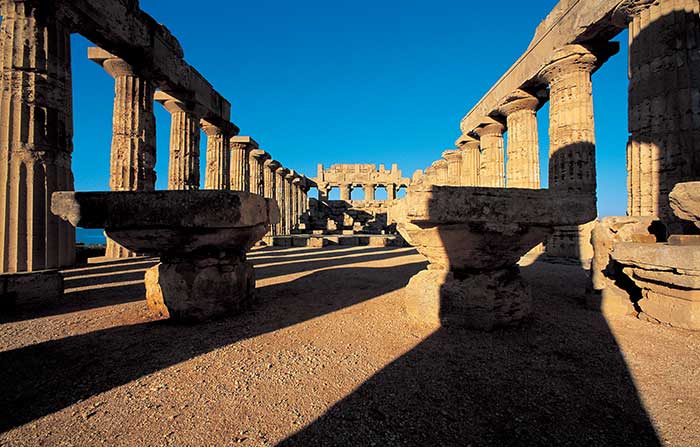 In the western part of Sicily, nestled between a beautiful blue sea and Mount Erice, stands Trapani, the city of two seas, so called because it is situated on a promontory surrounded by sea on three sides.
Trapani is also known as the “city of salt and sailing”. The salt pans, located along the road to Marsala, present heaps of extra-white salt, windmills and the renowned “Museo del Sale (Salt Museum)”. During certain periods of the year it is possible to attend the harvesting of the salt, which is traditionally harvested by hand. Here visitors can admire breathtaking sunsets. It is also important the sailing activity: Trapani often hosts prestigious national and international regattas. The heart of the city is the port, situated in the historic center, whereas its extreme tip is Torre di Ligny (Ligny Tower), where the Museo della Preistoria (Museum of Prehistory) stands, accessible through a narrow street surrounded by sea. Nearby you can also visit the villino Nasi, the former lazaret, seat of the Lega navale italiana (Italian Naval League) and the castello della Colombaia (castle of Colombaia) located on an islet just off the coast to defend the port and one of the best examples of military architecture in Sicily, and also the flagship of the city. Surrounded by deep blue waters, Trapani stands below the mountain of Erice and its medieval hamlet. A site of great archaeological interest is Mothia. Among the numerous events which animate the city, the Processione dei Misteri (Procession of the Mysteries) is undoubtedly the most famous: on Good Friday the city becomes the scene of a very evocative and moving religious event. Trapani is a perfect place for a holiday combining art, sea, nature and food and wine. 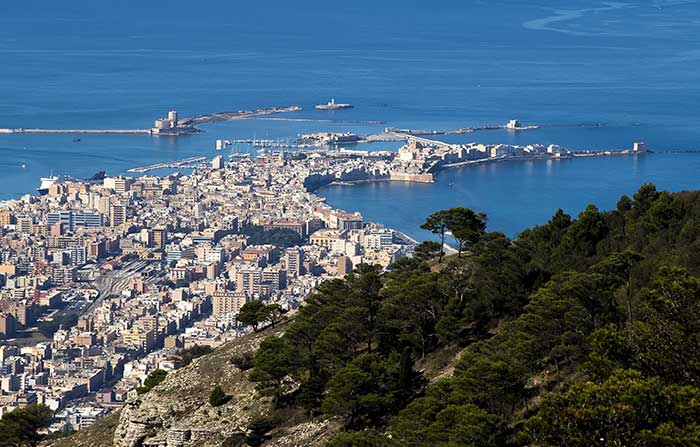